Situated between Clonmany village and the Glenevin Waterfall Park in the Inishowen Peninsula, St Columba’s (Church of Ireland)  built in 1772 is an integral part of the social, cultural and ecclesiastical history of the parish. Although roofless for nearly a hundred years there was a strong wish among members of the community that the existing character of the church be maintained as a ruin. Its stones and its graves stand testament to the passing of time and of changing circumstance.

A new committee St. Columba’s Straid  Conservation Group was formed in 2015 to promote the project, raise the funds to preserve what remained of the Old Church, maintain it as a safe structure in this historic landscape and make it accessible to the  public.

Phase 1 of the conservation work was completed in 2016. The vegetation was removed from the top of the walls and were sealed and plastered with lime mortar. The old wooden  lintels over doors were replaced with reinforced concrete lintels and two new wooden windows were manufactured locally and installed in the bell tower. 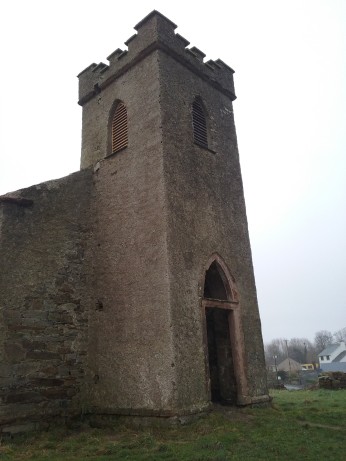 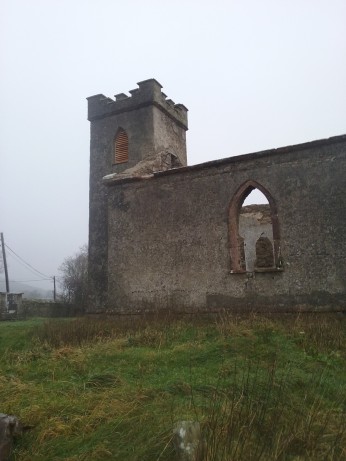 Phase 2. The floor of the church was resurfaced with fine gravel, the breaches in the boundary wall were repaired, and the graveyard was cleared of thick undergrowth  with the help of volunteers and a local Social Employment Scheme.

Final  Phase.  A two sided information panel designed by ARC and manufactured by Ascot Signs was erected in the grounds in 2018 to explain the history of the Church and the significance of the site. The front panel consists of a timeline of the site, 1834 and 1901 O.S. maps, pictures of the Church, the  Rectory (Dresden) and Glebe House (Dunally), the Miosach shrine complete with text in Irish and English. The reverse has a plan of the graveyard with prominent graves listed and marked to provide visitors with a self-guided tour.

St Columba’s Straid Conservation Group wish to acknowledge Heritage Council grants and the generous donations received from Friends of the Old Church, as well as the support given at local fundraising events. The Old Church at Straid has now been made safe for future generations and the information panels chronicle the history.

“The building should decorate the country if it cannot receive it, and at least be a monument to posterity,” remarked Frederick Hervey (1730-1803), the Earl Bishop of Derry who advised against making the Church too large when he contributed financially to the building. The conservation of St Columba’s with the architectural features now highlighted will bring home to all a knowledge and appreciation of our rich heritage.

The people of Clonmany are proud custodians of our heritage.