See how the work is progressing.

Private Sidney Humphris was only 17 when he died and was buried in the graveyard at St Columba’s, Straid.  A ceremony to remember him on the centenary of his death was held at his graveside on 29 September 2018.  It was attended by representatives of Inishowen Friend of the Messines, the Royal British Legion Northern Ireland and the Devon and Dorset Regimental Association along with members of the local community and the St. Columba’s Straid Conservation group.  The ceremony was followed by a reception in the Glen House.

Thanks to Carol Gilroy, Josie Toner and Catherine Walker of the Carndonagh Camera Club for the pictures in this gallery.

The event was reviewed in the Witney Gazette, where Private Humphris came from. 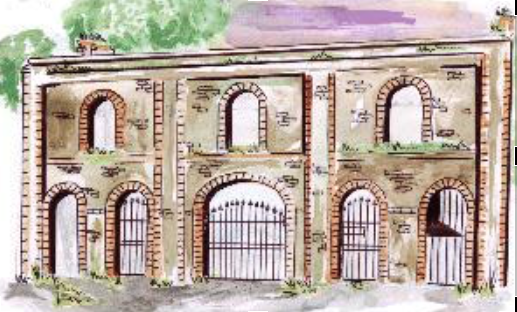 Programme of Events: All events free of charge except concerts

7.30 pm    Presentation by individuals of their family treasures

It’s not just about The Golf!

Yes, the Irish Open Golf is at Ballyliffin; it’ll be a five day wonder and we’ll be clearing up until the end of July! But how did we get here? A series of heritage events and exhibitions at the Market House in Clonmany Square, from July 4th to 8th hopes to explain some of this and to call attention to other aspects of the life of Ballyliffin, Clonmany and Inishowen as a whole, now and in the past. These will be open throughout the five days and have been organised by the Straid Church Conservation Group (www.stcolumbasstraid.com).

‘Clonmany Heritage Centre’ will  begin at 7.00pm on Wednesday with the opening of an Art Exhibition, after which, early members of Ballyliffin Golf Club will tell of its origin and development. At 8.30 there will be the first of two concerts (the second on Friday) by the Inishowen Traditional Music Project (www.inishowenmusic.ie). This, comprising young and old musicians from the peninsula, seeks to recover old music and to make it exciting and relevant to the way we live now.

Thursday at 7.30 sees a showing of the locally produced DVD of the life and legacy of the Shannachie, Charles McGlinchey, whose reminiscences, ordered and commented upon by the great playwright, Brian Friel, will be available for sale, with other books throughout the five days. The producers of the DVD will be on hand to answer questions. Thursday also features a conversation about how the Clonmany Festival, the area’s biggest attraction (before the golf!) began.

Friday is all about Music: first, at 7.30pm, there will be a talk about the still vibrant song and singing tradition of Inishowen. Given by one of Ireland’s leading authorities, John Moulden, it will survey how the traditions of the past have been saved to be newly presented by The Inishowen Song Project of the Irish Traditional Music Archive (www.itma.ie) and illustrate the way in which singing still cements families and communities. This will be followed at 8.30pm by a second opportunity to experience Inishowen’s unique musical tradition when the Inishowen Traditional Music Project give a second concert.

A pop-up museum will be opened at 2.30pm on Saturday. Local people will display items of historical and cultural interest and, at 7.30 there will be an opportunity to discuss their importance.

The Art and other Exhibitions will close at 7.00pm on Sunday. 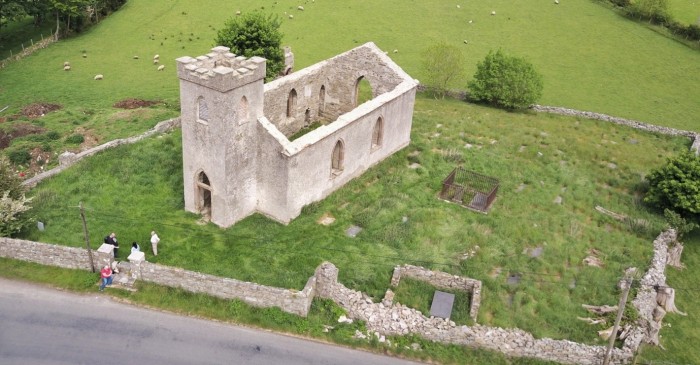 For many years it has been a local ambition to save this regional landmark and historic symbol from falling into ruin. Five years ago, a committee was formed and on Saturday 9th June, the feast day of St Colmcille, a celebration marked the successful completion of the project. Taking the appearance of an old style ‘turas’ or local pilgrimage, the committee, friends and neighbours, walked from the white stone (opposite Clonmany Parochial Hall and in the grounds of the local National School) that is believed to mark the entrance to the ancient monastery that gave its name to the parish  – Cluain Maine – the meadow of the monk Maine – to the now stable church building that stands surrounded by the graves of Catholics and Protestants alike, united in rest.

During the walk, its leader, Marius Harkin, traced the history and development of the village from its existence as a crossroads (it’s still known locally as ‘The Cross’) and the relocation of the population from Straid to Clonmany during the nineteenth century, to its modern expansion, at each stop allowing other people to share their memories.

Once arrived at the church, we stopped to admire the newly erected sign that gives the history of the church and its site and which gives the location of notable graves – including that of a former Rector, Rev. William Chichester whose name connects us with the owner of Inishowen in the early days of the Ulster plantation in 1609 and modern Irish politics, several of the Prime Ministers of Northern Ireland were descendants.

Inside the church, the floor newly covered with gravel, local archaeologist, Rosemarie Doherty, outlined the evidence for supposing that the present church building (of 1773) stands on the site of an ancient church at the centre of the former monastery, how the name Cluain Maine commemorated one of its former leaders, a follower of St Patrick named Maine, and how the politics of a slightly later time resulted in the site being rededicated to St Columcille, the apostle of Donegal  and the founder of the monastery of Iona, banished because of the loss of life he had caused in a battle fought over his right to copy a book. Books, she said, had once been venerated, richly encased and carried into battle as talismans.  She referred to the Miosach, a book shrine, among Ireland’s great treasures, which had been preserved in the Parish for centuries and passed the story to Con Doherty who lives beside the lands of the Ó Muirgheasáin, who had been protectors of the church lands and of this astonishing relic. Con told how, having been once sold for a few pounds it was eventually bought by the National Museum for well over a million. The famous sculptor, Maurice Harron, artist of the ‘Hands across the divide’ statue in Derry, and the dancers at Lifford Bridge, pointed out some of the really unusual features of the book shrine’s decoration. In a lighter vein, Margaret Farren, herself born just across the road, related how the site had been her childhood playground and how, having recently brought her National School Class to the site, it had made an impression on them, while Paddy Doherty (Little), whose great grandfather’s grave has now been marked by the project, shared his memories.

The walk back to the Parochial Hall was enlivened by anticipation of the waiting tea and sandwiches which had been provided by Sonia McGonigle of the Glen House; here was much to talk about, and talk we did.

Here are some pictures of the day courtesy of Frankie Stewart Photography. 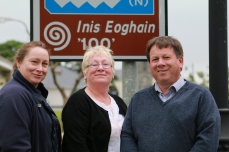 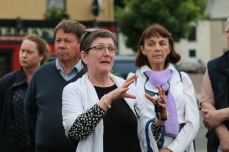 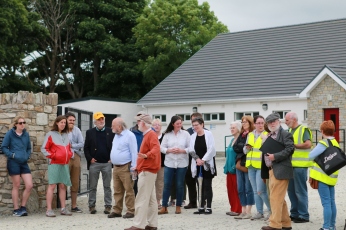 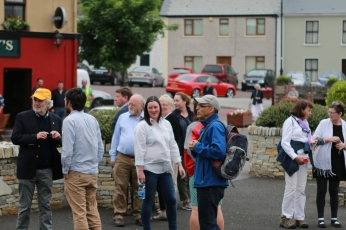 A guided walk on the Binion Road

In association with heritageweek.ie and The Heritage Council.

The St Columba’s Church Conservation Committee was delighted to join in the celebration of the 50th anniversary of Clonmany Festival.  Three guided walks were held by the Committee as their contribution to the festivities.  The first walk on Tuesday 8th August explored The Cross – the village of Clonmany itself.  The second on Wednesday 9th August was to the St Columba’s Church in Straid and the third, on Thursday 10th August travelled along the Binion Road.

Also on Wednesday afternoon a clean-up was held in the graveyard of the Old Church in Straid.  Thank you to all those who took part. 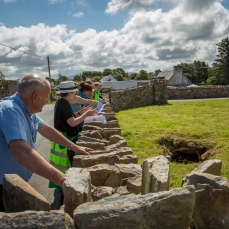 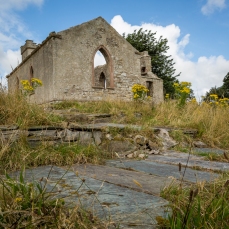 Altogether eighteen artists participated in the Art Exhibition which included oil paintings, pastels, prints, collagraphs, woodprints, watercolours, batiks and silks. The exhibition expertly mounted in the Market House by Martin Toland and launched by Liam Harkin, Carndonagh Community School staff member was the opening event of the Clonmany Heritage weekend programme 26 th -28 th August on the theme of 100 years of Clonmany Heritage. It was great to showcase the artistic talents of so many local and Inishowen artists and many locals and visitors viewed and admired the great variety of artwork on display when attending the other cultural and heritage events.

After the Heritage weekend the Exhibition was moved to the Glen House Straid where it remained throughout the next two months until 31 st October when the blind auction came to an end i.e. the best and final offer for each painting (as long as it was reasonable) was accepted. The blind auction was a big success and a considerable amount of money was raised for the Old Church Fund. There was also a prize draw for three paintings which augmented the funds. The first prize a painting by Josephine Kelly was won by Jane Fegan, Carndonagh; second prize a painting by Colette Heron was won by Ann Mc Erlean, Tandragee, Clonmany and the third prize a painting by Martin Toland was won by an English lady who was on holidays locally.

We are most grateful for the support to all the artists who generously donated their works of art which contributed greatly to the Old Church funds, as they had previously donated to the Carrickabraghy Restoration Society. Their encouragement in our efforts to conserve our local historic monuments is much appreciated.

Pictures that featured in the Exhibition

Thanks to all who came to the events and supported our fundraising efforts.

(event poster)
All events free except Concert – €5 in aid of the Old Church, Straid