The Importance of the Morrison family in Clonmany’s Monastic Past

Inishowen has a rich history of monastic settlements, and in Clonmany one such – believed to have been established by St Maine – is said to have been situated close to the ruins of St Columba’s Church, in Straid.

The monastic settlements were the centres of social and religious interaction, containing not only the monks, and in some cases their families, but a whole network of interdependent labourers and craftspeople –  smiths, shoemakers, farmers, bakers, cooks, butchers, stable-hands and laundry workers.  In addition, there would have been an abundance of visitors, from nobles to travelling beggars, each seeking physical and spiritual sanctuary. Keeping order over this hive of activity was the church leader.

Titles for monastic leaders varied from community to community, and while “abbot” would have been the most common, the title Erenagh (from“ardcheann” meaning “head”) begins to emerge in the ninth century. The Erenagh was expected to oversee the farming of the church land, to collect tithes from the tenants and keep the church lands in good order.  He was also expected to provide hospitality when required, this latter often being very expensive, as a bishop and his entourage were often ‘on tour’, travelling through towns and villages expecting star treatment.

The position of Erenagh was extremely responsible and prestigious, and all the evidence suggests that, in Straid, the Erenaghs were selected from the Morrison family, (O’Muireasans),who were said to be the servants of Colmcille, and had the singular honour of being The Keepers of the Miosach.

The Miosach was a reliquary, or book shrine, very similar to the more famous Shrine of the Cathach, and would have contained a manuscript thought to have been written by Colmcille himself.  Cut from a solid piece of yew and hollowed out to make a case for a book, it measured 10’’x 9’’x 3’’ and would have had a chain, possibly for hanging around the neck.  Its brass sides were enamelled and inlaid with silver, while its cover was inlaid with polished crystals.  The engravings and decorations of various groupings of religious people are thought to be bishops and priests, bearded and tonsured. There is a figure in the middle of the plate at the top, thought to be our Lord with extended arms, as in The Crucifixion. There is no cross, the figure being fixed to the box by the hands and feet. Its exact date of manufacture is unknown, although its older parts can be dated to the 12th century, and we know it was redecorated in 1534, when it was engraved with the words ‘Brian Mac Brian O’Muirguissan covered me anno 1534’. 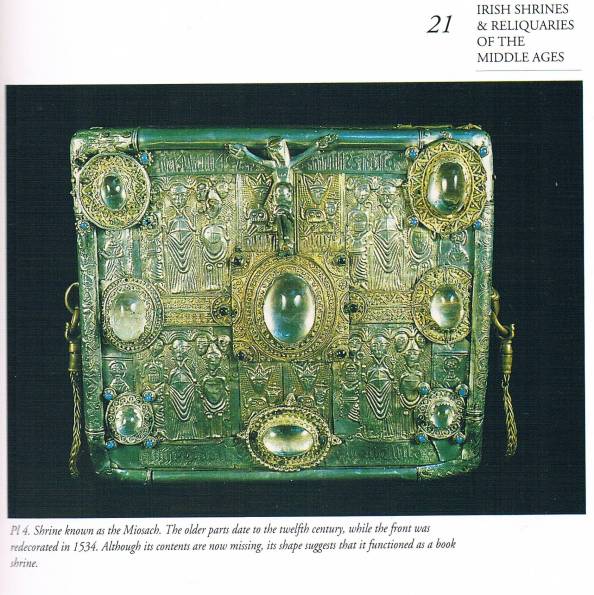 After the Miosach slipped from the possession of the Morrisons of Straid, it reappears at several different locations throughout history until, in 2001, the shrine was acquired by the Department of Arts, Heritage and Gaeltacht for £1.4 million and it is now in the National Museum of Ireland, Dublin.  It is a rare and beautiful artefact, a unique record of Inishowen’s monastic history and testament to the importance of the Morrisons of Straid.